How Public Markets Scale Up: Coming Out of Your Shell

By mksoneMarch 31, 2020Farmers Blog
No Comments

When a public market grows, it grows like a hermit crab. As the creature gets bigger and space runs out in its current shell, a market has to find a new shell that will not only fit its current activities better, but will also support its next phase of growth. Sometimes these shells may be a purpose-built market hall or another civic building; sometimes the shells may be unconventional, like a bus depot or an abandoned printing press building.

As we explore in our upcoming How to Create Successful Public Markets training on May 29th and 30th, markets succeed when they see themselves as public spaces and commit to serving the public good. However, when space is tight, it can be difficult to devote room to free events and public programs, complimentary uses like a health clinic, or even something as simple as a nice place to sit. To achieve the public support that sustains a market in the long run, markets need to expand and diversify their public mission as much as their vendor offerings—and that means they need to grow physically, too.

Why the Best New Shells are Secondhand

So what is it about old buildings that makes them such an ideal shell for markets looking to scale up? Urban thinker Jane Jacobs famously wrote, “Old ideas can sometimes use new buildings. New ideas must use old buildings.” By this she meant that cheap space, even if it is rundown, enables experimentation by reducing the economic pressures that come with new construction. Contrary to popular depictions, entrepreneurship and innovation are rarely the “highest and best use” of urban land in the short term. To survive, those risky activities require shared resources, subsidies, and risk-tolerant investments—more often from friends and family than from venture capitalists.

When a market has a roomy old building in place, it can start testing out ideas to grow or get established sooner than later. A historically significant building is always nice, but it isn’t necessary. More important are finding a site with the fundamentals of market feasibility—the right economics, access, visibility, and location. With that foundation, the market can begin taking a lighter, quicker, cheaper approach to growth. Starting with low overhead and taking many small risks helps market operators avoid costly mistakes and evolve their market over time—just as markets have done for centuries.

The following three scale-up success stories are taken from our experience providing technical assistance to public markets around North America. From our early days helping to save and transform Reading Terminal Market in Philadelphia, PA, and Eastern Market in Detroit, MI, to some of our ongoing projects in Buffalo, NY, Madison, WI, and Salt Lake City, UT—big, old, flexible buildings come up again and again as a means to grow a market’s impact, as well as its footprint. We even found one instance in Columbus, OH, where we helped a market relocate from one old building—an abandoned Quonset hut—to another—a vacant warehouse next door.

But these five recent projects exemplify the symbiotic relationship between scaling up and the adaptive reuse of old buildings. While each project played out in a local context, taken together they reveal a broader pattern about how great markets grow, evolve, and sustain themselves as they seek out new and unusual shells.

One big advantage of older buildings is that they offer more space at less cost than building a market facility from scratch. The conversion of a former newspaper printing plant to the Flint Farmers’ Market, has created more public space for seating, socializing, and programming, and part of the building was demolished to create a public plaza.

More “elbow room” provided an opportunity to affordably co-locate other complementary uses as well—community meeting rooms, a shared commercial kitchen, and even a pediatric health clinic. Research shows that people shop at public markets not just to buy food and other products but for the social experience, so these complementary uses are far from being just frills, and have a lot to do with the Flint markets’ increased sales and impacts.

A market can start experimenting with new uses and amenities before opening day. Following the lead of a feasibility study from Project for Public Spaces, the new Madison Public Market in Madison, Wisconsin, will open in 2021 in an old City-owned vehicle repair facility. Even though the site is still being used to repair city vehicles, a holiday market was recently organized to introduce the public market’s future home and vendors to the community.

From Bus Depot to Community Market

While every city now has examples of warehouses that have been converted to artist uses and creative industries, and more and more luxury condos, what do they do with old buildings whose spaces are too vast or quirky for conventional uses? With the right economics and history, a public market could be the answer.

The St. John’s Community Market in St. John’s, Newfoundland, Canada, had its grand opening in July, 2018, at its new location, a 14,000 square foot former bus depot. The new, larger facility has enabled the market to increase the number of vendors, provide infrastructure for prepared food merchants and a cafe, add a commercial kitchen and community room, and create more social, gathering spaces, including a public plaza. The market has also expanded its operations from one day a week to two.

From Two-Week Wonder to Year-Round Attraction

A functional, flexible market site does not even need to be empty; it can simply be underused. In Salt Lake City, Utah, five historic barns at Fairpark, the Utah state fairgrounds, are used today to showcase livestock during the two-week summer fair, but for the other 50 weeks of the year, they sit largely vacant. Project for Public Spaces recently completed a feasibility study with local architects, CRSA and the Salt Lake City Redevelopment Authority, which proposed a lighter, quicker, cheaper evolution of the historic barns into an international night market. Stadiums, event spaces, commuter rail stations, schools—they all present opportunities for a complementary market use in their off hours.

Following a massive flood in 2008 that devastated 10 square miles of downtown Cedar Rapids, a group of concerned citizens asked PPS to help create a new, indoor-outdoor public market to bring life back to the city’s core. The city showed us any number of buildings that were suddenly now available for a market—a science museum, the bus terminal, the public library—but we recommended a nondescript warehouse located in the center of the historic Bohemian neighborhood, dubbed “NewBo.”  The structure survived 13 feet of flood water, had the right dimensions for a market hall, and was ideally situated to help revive the neighborhood’s main street that was also almost completely vacant after the flood.

The 16,000-square-foot, year-round Newbo City Market opened in October 2012. The centerpiece of this $4.25 million project is the Rotary Hall which features over 20 permanent tenants. Half the main floor of the market was intentionally left as flexible space for temporary vendors and events, as well as a commercial kitchen. This flexibility has enabled the market to serve a wide variety of lighter, quicker, cheaper programs, complemented by the an outdoor “front yard,” which is now a well-used public space that hosts over 150 seasonal vendors and a wide variety of major public events throughout the year. Today, the market brands itself as a “business incubator,” where “something new and different is always happening.”

The NewBo City Market has created a central meeting place for Cedar Rapids and triggered the recovery of the once devastated NewBo district around it. According to the Czech Village/New Bohemian Main Street District, since the initial $4 million investment in the market, $44 million has been invested in residential and commercial properties and $7 million in public improvements, including streetscape and infrastructure improvements. The organization counts 103 net new businesses and 419 net new jobs.

In a time where malls, department stores, and big box stores are struggling to stay alive, public markets are bucking the so-called “retail apocalypse.” In fact, many of them are bursting at the seams! What they often need most besides their talented managers and vendors is a new shell, an experimental attitude, and a supportive market ecosystem to take a leap of faith into their next phase of growth.

Whether you are a market manager trying to figure out how to scale up your impact or you’re just getting started, join us on May 29-30, 2020 for our How to Create Successful Public Markets. 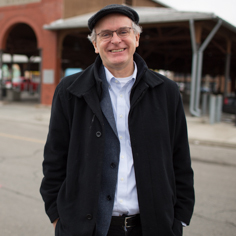 We’re a year round public market with 50+ vendors inside the building and more outside. Our market is neat and clean and feature several produce vendors, a great meat market, poultry, breads and baked goods, cheese, a wine shop, an art gallery, a cafe, middle-eastern and Mexican groceries, and many unique gifts.

Get to the Market