Many of today’s residents have wonderful memories of visiting the Market with their parents or grandparents.

Market moved across the river to the west side of Smith Street.

After the World War 1, the market moved back downtown to the corner of Harrison and Union Streets. Current site of UM-Flint’s Thompson Library.

The market moved from what had been its downtown home since 1920 to a spot upstream along the Flint River. New building erected by WPA workers. The trusses supporting the roof were brought over from the old Union Street market. 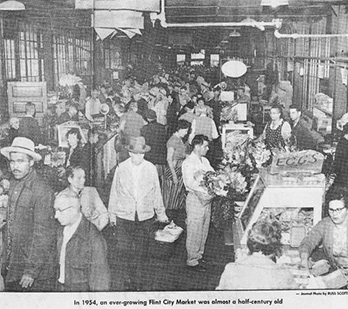 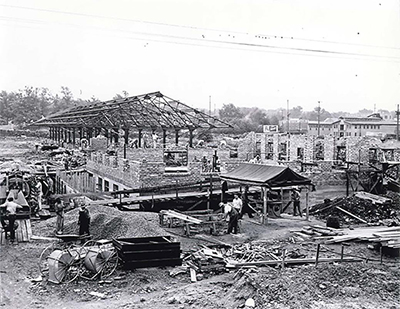 Uptown Reinvestment Corporation assumes management control of the market from the City of Flint.

The earliest recorded open air market in Flint began on the southeast corner of Beach and Kearsley Streets during the summer of 1905.

It doesn’t take much imagination to picture the morning bustle of open wagons loaded with produce, crates of squawking chickens, and sides of beef on summer market days. By 1912, after several summers of wagon ruts, and congestion on a busy city corner in a downtown beginning to embrace the automobile, leaders determined that the City Market should be moved out of downtown.

They chose a plot of land “across the river” on the west side of Smith Street (Grand Traverse) along the north bank of the Flint River.  It’s not clear from the records why; perhaps the onset of World War I, but that location didn’t work. During the years of the First World War the market struggled, and never even opened in 1917. After the war, city leaders brought the market back onto the downtown side of the river, this time to the southeast corner of Harrison and Union Streets (the current site of UM-Flint’s Frances Willson Thompson Library), where a large, drafty building was erected in 1920. Some of our current vendors remember stories from that building, as they traveled there with their parents as small children.

After twenty years on Union Street, history repeated itself.  The Union Street market, like its 1905 predecessor, was deemed to be creating too much congestion in Flint’s growing downtown.  So, in 1940, the market was again moved out of the central business area.  Built by WPA workers (President Roosevelt’s Works Progress Administration), the new Flint City Market rose on the banks of the Flint River just north and east of downtown.

The steel trusses supporting the roof were the originals from the 1920 Union Street building, wheeled over to the site on railroad cars. When the trolley tracks which ran along Industrial Avenue next to the old Buick plant were torn up in 1939, they were recycled to form the pilings which anchored the market’s cement floor. We know that the Market Master (a title out of the distant past) used to live on the second floor in space occupied by Steady Eddy’s and Art at the Market, that there used to be a police mini-station in the old Thompson Creek Turkey Farm, and that there was a police vehicle storage area and firing range in the market’s basement.

That building served Flint perfectly from 1940 until 2014.  Many of today’s residents have wonderful memories of visiting the old City Market with their parents or grandparents.  But when the Flint Journal vacated its First Street printing facility, an architecturally unique structure erected in 2004, an opportunity arose which could not be ignored.  In June of 2014, the newest and most beautiful edition of Flint’s storied public market opened on its current site.  And in the short time since that opening, the Flint Farmers’ Market has already begun to take its place as one of the great small city public markets in the country.  Come visit us and find out for yourself.

We’d love to hear from you! Stop on by the Flint Farmers’ Market

We’re a year round public market with 50+ vendors inside the building and more outside. Our market is neat and clean and feature several produce vendors, a great meat market, poultry, breads and baked goods, cheese, a wine shop, an art gallery, a cafe, middle-eastern and Mexican groceries, and many unique gifts.

Get to the Market